While the victorious Allied powers tried to secure peace through collective security and prevent another world war, they failed to meaningfully address the serious grievances created at the Paris Peace Conference. Germany, Italy, and Japan each had reasons to be leery of the post-1919 world order, and while each briefly participated in collective security, economic problems caused by the Great Depression in the 1930s working hand-in-hand with national humiliation and resentment sent all three down the road to aggressive war.

For their part the ‘good men’ (the upholders of collective security, especially Britain and France) showed themselves unwilling and unable to stop the aggressors, choosing often to appease them instead of applying League pressure, thus encouraging even more aggression, and discrediting collective security

One key similarity between developments in Germany, Italy, and Japan was the rise of totalitarianism. This ideology strongly gripped government and society in all three states, starting with Italy in the 1920s, and solidifying in Germany and Japan in the 1930s. Totalitarianism took on slightly different forms in Fascist Italy, Nazi Germany, and militarist Japan, but generally:

Italy’s grievances began concretely with the ‘mutilated peace’, the term used by Italians to condemn their alleged betrayal by the Big Three. When Mussolini became leader of Italy in 1922, he turned it into a fascist state, and set out to reverse Italy’s humiliation in 1919 and recreate the ancient Roman Empire. His aggressive foreign policy, the League’s resulting failure to uphold collective security, and his eventual close alignment with Germany (uniting the two western totalitarian states) helped lead to WW2: 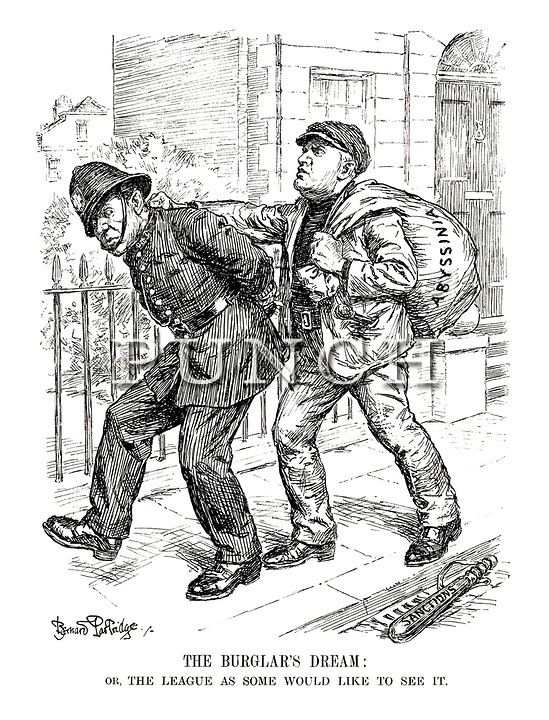 British cartoon, 1936, titled The Burglar’s Dream. The policeman represents the League of Nations, and the burglar, Mussolini. Note the policeman’s club, labelled ‘SANCTIONS,’ lying on the street

Japan’s grievances had originated in the late 19th century: as an Asian nation she had been treated with discrimination by the western great powers despite her remarkable growth and military strength (even defeating Russia in war in 1905). This sense of humiliation was only confirmed at the Paris Peace Conference, despite Japan being one of the victorious powers. As the Japanese economy was hit by serious depression first in the early 1920s and then 1930, the militarists came to dominate the government, sending the country down the road to war, and aligning her with Germany and Italy:

Germany had concrete grievances from the Treaty of Versailles. She chafed bitterly under the Versailles terms, struggling with political instability, serious economic depression (after a brief French invasion in 1923), war reparations payments, and a festering sense of national humiliation. Though Germany flirted with collective security (even joining the League in 1926) and enjoyed economic recovery in the latter 1920s, the lingering bitterness was never addressed; the Nazi Party played on these feelings to build support throughout the 1920s, and though it was ignored while the economy recovered, the Great Depression made it very popular. By 1933 the Nazis under the charismatic and shrewd Hitler had won control of the government, and outlawed all other political parties. Hitler would now tear up the Treaty of Versailles piecemeal, leading the country to war in 1939:

We sometimes oversimplify the interbellum story of Germany, Italy, and Japan as totalitarian villains versus the dithering ‘good men’. In reality the picture was more nuanced and complicated: appeasement, though unglamorous, at times really was the only viable option short of war (which Britain and France simply were not ready for before 1939); nor were the totalitarian states obsessed with conquest for its own sake, but often saw it as a viable solution to the economic damage done by the Great Depression (or at least used this as an excuse for aggressive expansion); and we often forget that the USSR, equally wary of German expansion in the 1930s, was herself a totalitarian state as well, sharing many characteristics with Nazi Germany, Fascist Italy, and militarist Japan. This only complicates the picture since the USSR would become a key member of the Allies in the struggle against the Axis powers during WW2.

The unholy alliance — between an old empire (Britain), a self-proclaimed champion of democracy (the US), and a totalitarian juggernaut (the USSR) — that would defeat the Axis powers by 1945 fell apart very quickly; the fallout from this would shape the international order until the end of the 20th century.