Warmup — what were the characteristics of the Five Year Plans, according to the following posters? 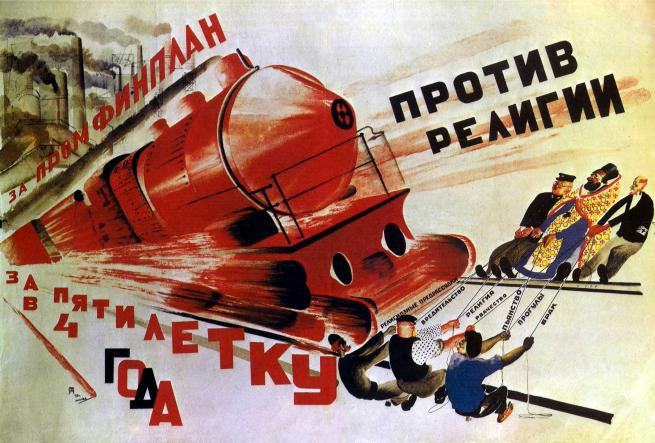 Soviet poster, 1930. The caption reads “Complete the Five Year Plan in Four!” To the right, enemies of the state are trying to stop the train 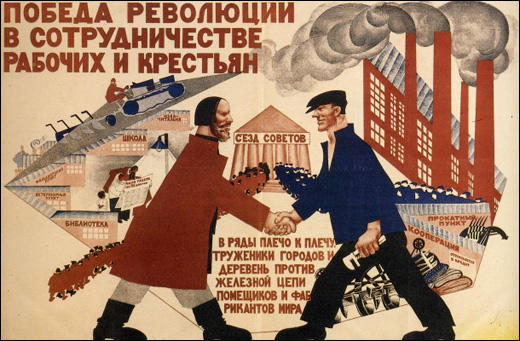 Soviet poster, 1930, titled Congratulations. Note the factory on the right, and the mechanised farm on the left

Nyet to the NEP, Da to Industrialisation

By the late 1920s the NEP was increasingly seen as an ineffective policy within the Party, which greatly helped Stalin when he turned on Bukharin and the right wing (who were NEP supporters). Even as early as 1927 there seemed to be good reasons to pursue rapid industrialisation, since the NEP:

Stalin made use of this sentiment for his own political goal of eliminating Bukharin and the Party right wing, and securing the Party leadership. Having done this, he began in 1928 to speak of a Second Revolution, this time of quickly industrialising the country. This shrewd move not only placed him on a par with Lenin (leader of the October Revolution) but also consolidated Stalin’s position, portraying his reign as a fresh start; none of his opponents dared voice any opposition. The USSR would now embark on her first Five Year Plan as she raced toward industrialisation

The key method to achieving rapid industrialisation was the Five Year Plan, a five-year project on a national scale that was designed to boost all areas of production, with a special focus on heavy industry production. The USSR completed three Five Year Plans from 1928-41, the third one cut short by the Nazi German invasion of 1941, while two more were completed after WW2. Several key features of the Five Year Plans stand out:

Assessing the Fruits of Industrialisation

The Five Year Plans mobilised the Soviet people on an unprecedented scale, harnessing talent and labour from the highest state and Party officials to the lowliest forced labourers. The Plans produced impressive results overall — at staggering cost in human suffering — though they were also marred by several key failures. By 1941 one could say Stalin’s dream of an industrialised USSR had been achieved. Was it worth it? Millions had suffered and died in the name of rapid industrialisation, though arguably it was rapid industrialisation that allowed the USSR to survive the Nazi German onslaught in 1941, and prevent a nightmarish occupation

The successes (and failures) of the FYPs were however only one of the two legs of Stalin’s economic policy. The second leg, the collectivisation of the USSR’s agriculture, would see similar breakthroughs and horror.